The Secret Sandler Tactic For Chicago Salespeople: Use Multiple Submarines 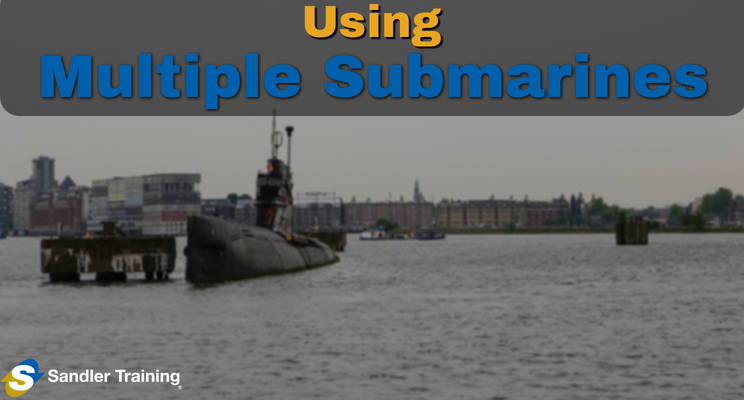 Do you have a defined selling system? There’s a number of them that you can use.

Of course, I'm biased to Sandler. I think it's the best process and system out there. But any system is only as good as you apply it.

Very few people that I've coached over the years use the Sandler System in its actual order, all in one meeting.

What the Sandler System does do, though, is provide the framework having multiple calls.

Multiple submarines are something I've been talking about for years. I think this concept, for most people, takes the theory of Sandler (the literal seven-step process) and makes it something that's more realistic to use.

Here is an example of Multiple Submarines. Though this may not totally apply in your world, it is a common scenario. Instead of one meeting being all seven steps, it would look something like:

• The first conversation on the phone would be some rapport.
• Set a quick upfront contract on the phone to have a conversation.
• Find some pain.
• Figure out if there's a next step. An appointment is an example.
• And then, post sell it to make sure it's going to be a real appointment, and they’re not going to cancel.

When you get to the in-person meeting, there's another submarine.

But then, for example, you say, "Okay. Our next step is I'm going to bring one of my technical people in," or, "You're going to come to our facility and visit our facility."

In that third meeting that you’re bringing a technical person to, the third submarine would be:

• Bonding rapport.
• Upfront contract.
• Looking at deeper levels of pain and understanding their needs.
• Discussing the budget to really fix those needs.
• What the decision process is going to be.

And then a next step in another upfront contract for the fourth submarine, which should be:

As you're looking to apply Sandler and the submarine, remember it's not as simple as the seven steps. I wish it was. It would make life way less complicated! But here's the thing, life is way more complicated using no selling system at all.

Beware Of Premature Presentation Syndrome as a Chicago Sales Professional

Sandler Secret: Use The Submarine As A Diagnostic Tool

Dealing With Terms & Conditions As A Chicago Sales Professional

How To Get To The Right Decision Makers