How To Get To The Right Decision Makers 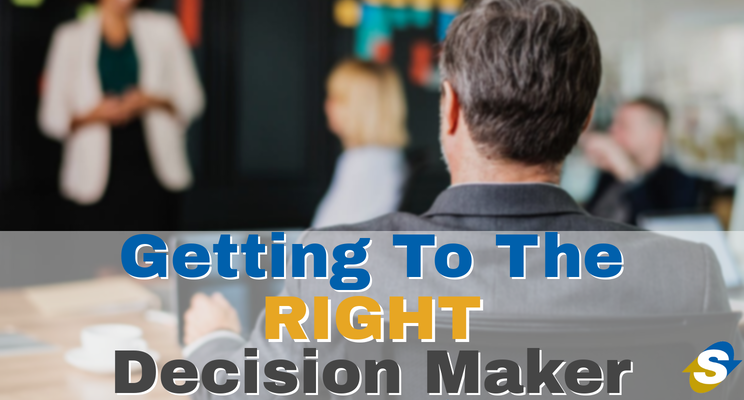 This blog article is about getting to the right decision maker.

Why is this an important topic?

If you've been in sales for any longer than five minutes, you have certainly experienced a situation where the person you're meeting with or calling on is not the right person.
That or they're only part of the process and you're not getting to the right people who make the decisions you need.

If you've found yourself here, you may have already figured out how to navigate to the right decision makers.

If you haven’t been able to figure this out, I want to give you a couple extra thoughts today because if you're dealing with people that can say no but can't say yes, that can be a problem. Not only is it a waste of time but the mental drain of spending all that time with this person can take its toll. You may feel that they just wasted your time and they took your knowledge. In Sandler, we call this unpaid consulting.

First of all, the mindset needs to be that there's no such thing as a decision maker, singular. There are decision makers, plural.

In today's world, people want to cover their rear end. They rarely, if ever, make decisions without at least running it by one person. And you need to, as the part of the sales process, better determine who the cast of characters actually are.

To get to the right decision makers you can certainly utilize LinkedIn and Google. Now you might be rolling your eyes saying, "Well, like duh," but are you actually using these?
If you're looking for people on LinkedIn without adding Google in case something doesn't come up, I'd suggest you start doing that right away.

Other things like using video as a way to get people's attention.

You can even go old school. Record it on your phone. There are also programs like Vidyard. That's something that I use and it's right on my desktop. I just hit the record button, do a quick message to someone and then copy the link into an email. I have had people using that for prospecting or just for communication with multiple decision makers in organizations. It's real easy to consume. They just click on it, it pops up and it works.

Texting is another one. Are you texting multiple decision makers and people in organizations? I know what you may be thinking. My head trash used to be “Well, texting is a violation. I've crossed a line. I'm stalking them.” Some people might react that way, but I found that more and more people are kind of expecting it to be part of business. I think it used to be a violation of personal space, but there's a whole movement going on. If you read what's happening in the world of marketing, technology and selling, texting is a sales tool that the top sales people are now adopting as a way to get to people, either with videos or with text messages.

And then, of course, getting direct phone numbers.

There is now technology that works with LinkedIn where you can get someone's direct number. I know this works because to test out the technology, I put my name in and somehow it knew my direct number in the office. I’ve not listed this number anywhere.

I don't know how this works.
It's kind of scary stuff, but it's there.

A couple of last ideas:
Asking to get in front of the other people. I know that might sound obvious, but I have a lot of salespeople that know they should ask this, but they're not asking REGULARLY because they don't want to push it. They don't want to be obnoxious.

They don't want to feel like they're too pushy and too salesy in the buying/selling dance. But if it's truly something you believe in, why would you not get other people involved?
And there are also times where you don't even ask. You just say, "Hey, here's what I need to do. If we're going to move this forward, I need to get these other people involved."
If you ask for permission, you might get it. But there are times, where you just plant your feet and stand your ground and say, "If we're moving forward, here's what we have to do."

This all starts with having the mindset of getting to the right decision maker.

Which of the ideas I shared with you today are you going to implement as a way to get to the right decision makers in the sales process?

Up-Front Contracts Are An Attitude Chicago Sales People Should Adopt

How To Hire An Effective Sales Professional? - Test Them BEFORE You Interview