Are You Roleplaying With Sales Candidates in 2020? 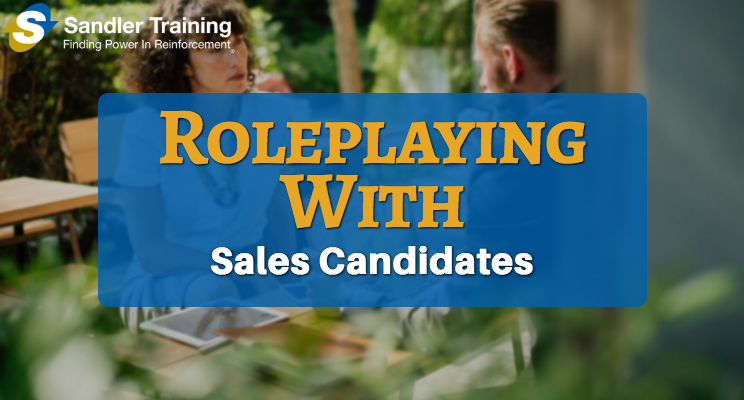 And that’s role-playing and practicing DURING the interview.

What happens is that many interviews are that kind of standard conversation.

As you know, the Sandler interview process is much different than this. The way we go negative and we challenge. But also, role-playing in the interview is another best practice I'd encourage you to start doing if you're not doing it already.

Imagine this: you're a pro baseball scout and your job is finding new talent for your major league team. (Let's say for one of the Chicago area teams). You’re supposed to find people and then recruit them to bring them into the organization as star players.

Imagine if you didn't watch them play.

All you did was look at their stats. I can't imagine not watching someone play a game before you say, "Okay, I think they're a good fit. I think they can actually do it. Their numbers are one thing, but I've seen them execute."

A lot of sales candidates can interview well but can't always sell. The more you can create a real selling scenario, the more likely it is you’re going to be able see if they’re real or not. When you're role-playing, pick those scenarios that you encounter the most. If you do a lot of prospecting, do a bunch of prospecting role-plays. If you do a lot of upselling or account servicing or account management, then find scenarios that apply to that role. If you do primarily phone work, then there should be a phone role-playing component where you're going through scenarios.

Make it tough and do it multiple times. Get really comfortable with it. Let's say you're hiring for a role that has the new hire calling on a lot of prospects. While you’re roleplaying, you say, "Okay, let me hear your cold call." Ring, ring, "Hello."

If they stumble and obviously don’t know what they’re doing, hopefully you don’t think that all of a sudden they're going to learn how to cold call when they go and work for you… assuming you’re looking for a PROSPECTING MACHINE that does this kind of behavior day in and day out. If you want to hire that person, they should be able to, at the drop of a hat, go into that role without hesitation.

There’s not a team out there that would bring on a new star player without seeing them play first. The last few hires that you've made, have you actually seen them in action? Have you seen how they sell at a really deep level? Have you seen how they handle objections? If you're not, I'd suggest you make it part of your improvements going forward.

Here are some of my recent articles:

How Do you Expect To Manage Salespeople, If You Aren't A Student First?

Creating Value in Every Interaction

Coaching The Contrarian Salesperson in Chicago - Adult to Adult

This One Mindset Can Help You Transform Your Selling Dynamic