What's the Temperature of Your Prospecting Calls?

May 7, 2019 by Karen Meracle in Prospecting & Qualifying 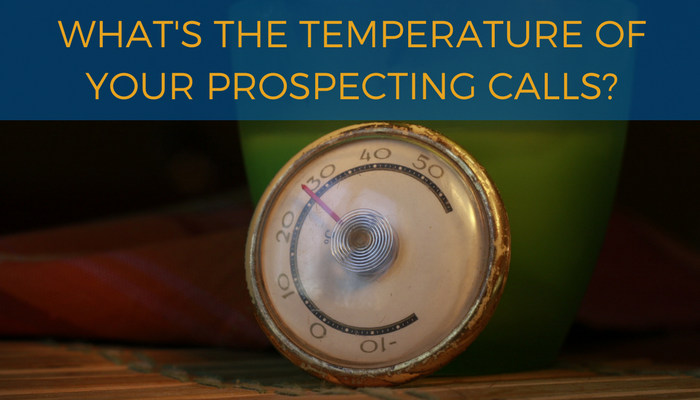 Sandler defines four “temperature” classifications of prospects - cold, cool, warm, and hot - based on criteria that suggest their degree of saleability. Let’s examine each.

Cold prospects are prospects about which you know very little. Perhaps, nothing more than their names and locations. Technically, and more appropriately, they should be referred to as suspects. For simplicity, we’ll refer to all potential customers as prospects.

Suppose, for example, that you sell office furniture systems and you’ve driven past ABC Technologies Plc several times. You know nothing about the company. ABC would be considered a “cold” prospect. The large single-story building could be a huge warehouse facility (representing a little opportunity to sell office furniture)…or it could be filled with offices (representing a considerable opportunity). If one day, you decide to stop in and find out what the company does and if they might have a need for your products, that would be considered a “cold” call.

A “cool” prospect is one for which, in addition to name and address, you have some other information about the company or individual. Perhaps you read an article in the business section of the newspaper about ABC’s plans to relocate the warehouse space in their current facility to an off-site location and convert the current warehouse space to offices. That information elevates ABC to a cool prospect. If you decided to call on them, it would be a “cool” call.

Sandler reserved the “hot” prospect classification for existing customers. Why classify existing customers as prospects? To remind salespeople that they should be working just as hard to keep their existing customers as they did to secure their business in the first place. He warned, “Your best customer is at the top of your competitors’ prospect lists.” He also suggested that salespeople should always be looking for ways to provide additional value to their customers. A strategy that will not only strengthen the relationships (and keep competitors at bay) but also open the doors for additional business.

It’s important to recognize that the potential for doing business with ABC Technologies Plc is the same whether they are initially classified as a “cold,” “cool,” or “warm” prospect. However, the ease (and probability) of making the sale (measured by time and effort required), increases with the prospect’s temperature rating. That is, in most cases, it’s easier to conclude a sale with a warm prospect than with a cool prospect. And it’s easier to close a sale with a cool prospect than with a cold prospect.

What should become clear is that the more information you have about a prospect, the easier it will be to close the sale if the potential to do business exists. With the amount of information available online, there’s no excuse for not knowing something about the companies you plan to call or the people with whom you plan to meet (which means you should rarely have to make a “cold” call).

Don’t limit your information search to the prospect company’s website (although that can be quite helpful). But, also check trade journal and newspaper databases. Perform a search for articles by and interviews with the company’s executives.

The more you know about the company or individual you’re about to call, the more prepared you’ll be to ask intelligent and relevant questions, and the more meaningful the resulting conversation will be. By doing the research, you establish your credibility and differentiate yourself (in a favorable way) from other salespeople. Imagine, for instance, beginning a conversation with a decision maker by referring to three points he made during an interview with the local Business Journal rather than starting the conversation with the more common “Let me tell you why I called” approach.

By investing a little time to do the research, you can increase the temperature of your prospecting calls…and increase your chances of closing sales.

Karen has more than 23 years of extensive sales experience that she brings to her clients. As an associate at Sandler Training, she uses her passion for helping individuals and companies develop and grow professionally, using the proven Sandler methodology for both sales and sales management development.
Share this article:

Fear of Technological Change Can Help You Sell

Turn Bad Times to Your Benefit