May 7, 2019 by Jody Williamson in Professional Development 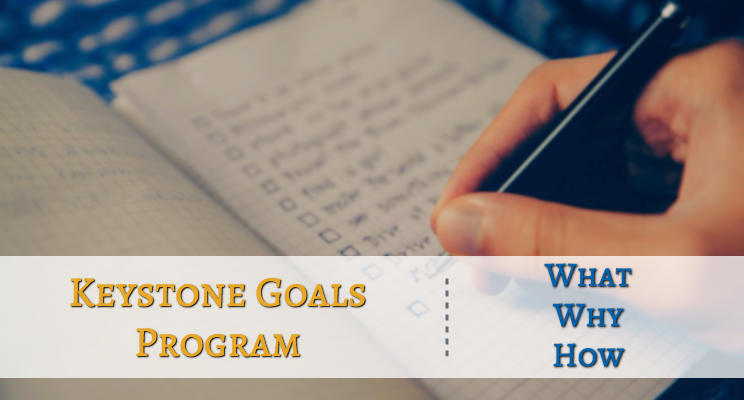 It's that time of year again. I hesitate in saying that because when it comes to goal setting, the mindset for people is that near the end of the year, only then do they set goals. As you probably know in your heart of hearts, that ‘once a year goal setting and review’ just doesn't work.

I do want to say that this time of year is the perfect time to take a reset and look at the following year. But I just want to make the point up front that this isn't meant to be a once a year activity. It's a process where you do some goal setting for the year, and then you do regular monthly check-ins on progress, changes, and updates. As the year evolves, new things are going to come up, you’re going to make some changes, and make some revisions. That's understood.

I'm attaching the Keystone Goals Program document here so you can work on this.

You can also check out the Keystone Goals Self-Guided Training here.

The concept of what, why, and how, that I developed. When I developed the Keystone Goals Program, I found that in my experience, many goals programs were intellectual. They were a good starting point, but I found that it was more important to focus on the emotion. I found that for myself, and those I worked with, coached, and observed, that it’s the emotion that gets people to follow through.

When you're doing your goal setting, the first step of course is what's the goal. It could be a health goal, a relationship goal, a sales goal, or a personal development goal. If you just do that, you're light years ahead of where most people are.

BUT, if you want to increase your likelihood of implementation, I want you to really think about the why.

A very common goal this time of year is a weight loss goal. People say, "Okay, I'm going to lose ‘X’ number of pounds in 2019” that's the what. But when I've seen people who are more successful than others, I’ve found that almost always it's the why that drives the behavior that leads to the result.

Now, the what can do it for some people, but overall it's the why that drives the behavior. Think about it. If you're setting some aggressive goals, and you're setting some things to stretch you, they're not going to be easy. If it's this intellectual ‘what’ goal, it just doesn't get to the same emotional metal space that increases your likelihood of pushing yourself through those times where you just don't feel like doing certain things.

Then the how is what actions do you need to take? Whether its health, relationships, or sales, what can you measure over time? When someone gets on the scale and see their weight, that's a lagging indicator. You get on the scale in the morning, you look down, you might say, "Oh, I'm not happy with the number,” but the number didn't happen that day. The number happened over the last week, and month, and years possibly. Those were the actions that led to the results. The leading indicators that will get you to the what are the hows. What actions can you put in place that you can measure, that you can track, that you can hold yourself accountable to, and hopefully share with others to be held accountable?

The other thing I wanted to share with you besides the what, why, how framework is a little bit of a different challenge.

Consider starting all your changes December 1st, and not January 1st. There's something about January 1st that's a natural starting point. It's kind of a clean slate we start the year with. I also know there's kind of a place you can fall into where it's, "Okay, here we go again. My resolutions start."

Here's the word track I hear "Okay, well, I'll start after the holidays because the holidays are tough, there's lots of stress, I got family stuff, we're eating all kinds of crazy food, and it's a slow time in sales, so January 1st it starts."

It's almost like that word track sets us up to build in some bad behavior during December. I’ve found that (and experienced this a few years ago) December 1st was actually a really good time to break the pattern. It was way easier to carry through my behaviors into January if I didn't get so off track in December that now I had to play catch up to get back on track.

In the document, I'd encourage you to take some time, go to a quiet area, and really do some thinking in the different categories in the Keystone Goals Program. Focus on the what, why, and how. Especially spend some time thinking about the leverage you're going to get by the why. Then, of course, try to start as soon as possible. I'm getting this to you today so you can’t start December 1st, but look at implementing and working on this in the next couple of days so you can implement it before the new year.

Live near Northbrook or Chicago, and want to come experience the Sandler methodology in person? Click Here To Check Out Our Complimentary Monthly Masterclass