Sandler Brief: Don't Take A Shot In The Dark 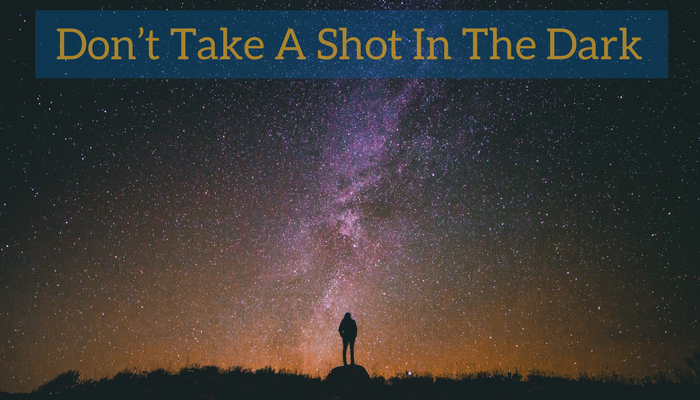 Ken’s closing ratio had been the lowest on the team for four months running. Juanita, his manager, asked him to meet with her privately so they could figure out, together, what the possible obstacles to better performance might be.

Juanita said, “Can I ask what kind of strategies you’re using to identify the pricing and product offerings?”

“What do you mean?” Ken asked.

“Well, before you put together a proposal, how much hard information are you getting about the amount that somebody is actually willing to pay for working with us?”

“Yes – what kinds of questions are you asking?”

Ken looked embarrassed, and it was a long time before he could work up the courage to admit the truth: He knew he was supposed to ask prospects about what kind of budget people had available, but he just wasn’t doing it. The few times he’d raised the subject, during his first week on the job, his prospects had put up resistance that made him feel uncomfortable. It had been over six months since he’d asked anyone, directly and specifically, whether or not there was enough money available to pay for his company’s products and services.

“It sounds like that might lead to a lot of dead ends,” Juanita observed. “Do you find you’re chasing down a lot of people you create proposals for, people who end up making no decision at all – and disappearing?”

“Yeah,” Ken said ruefully. “I suppose I am. Right now, I’m just guessing when it comes to pricing. And I’m pretty much sending proposals out to everyone.”

“Okay. Would you be willing to look at another way of deciding who gets to see your proposals?”

“I would. I know I have to find some way to turn this around. I need to see more commissions coming in.”

Juanita was in full agreement – so the two began working on developing some new questions about budget that Ken could feel comfortable asking during sales calls.

Identifying an appropriate approach for “closing the gap” between what the buyer wants to pay and what you want to charge should be a collaborative effort. Second-guessing how much a prospect would be willing to invest with you to close that gap is not an appropriate strategy.

If a buyer is unwilling to provide you with any financial guidelines for identifying a budget-friendly solution, it would be appropriate to question his commitment to doing business with you.

Before you decided to disengage, however, you should pose a respectful but direct question about what’s keeping the buyer from opening up about what he or she is willing to spend.

Mike, you’re asking me to put together a proposal for an effective way to help you reduce the warehousing costs of subassemblies awaiting final production. However, you’re unwilling to provide me with relevant information, specifically, your investment expectation, which will enable me to choose the best alternative in relation to those expectations. Would you at least share with me why you’re asking me to take a shot in the dark rather than giving me something with which to work?

If this doesn’t lead to a better, clearer discussion about the buyer’s budget for working with you, then you are best advised to close the file and move on to another opportunity.

Following Juanita’s advice, Ken changed his approach. He began asking buyers directly about how much money was available to work on specific projects. When people pushed back – and some did – Ken politely asked why the person would ask him to take a shot in the dark in assembling his proposal.

As a result of posing that question, Ken got better answers from some people – and clearer indications from others that they just didn’t have the necessary funds to work with Ken’s company. Because he disengaged from those leads sooner, Ken’s qualification skills improved – and so did his closing figures.