Call me after the Holidays (Updated For 2020) 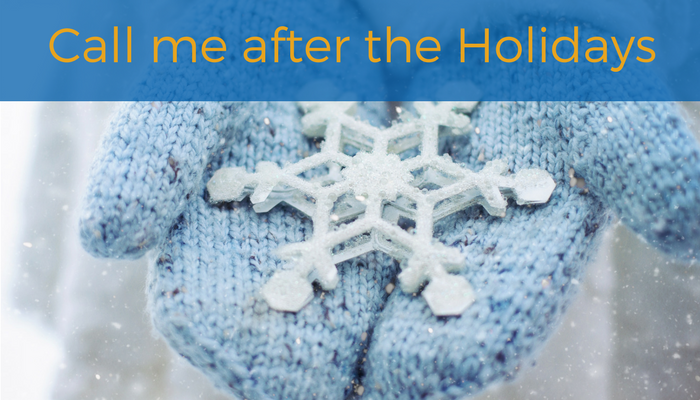 We are officially in ‘call after the holidays’ mode! I imagine a secret email or memo that goes out to all the prospects that you may call on and they don't tell you about this memo because it's top secret. It basically says:

“Hey, now until January 2nd, you can use ‘call me after the holidays’ as your blow-off to salespeople” I have a pretty good indication based on my spies that this secret memo does exist somewhere.

Let's talk about the psychology of this, and why it even happens.🤔

First of all, it's the automatic conditioned response that when a salesperson approaches someone there's a pushback to some form of ‘blow them off’. The convenient nurturing way to do it is calling me after the holidays and it works!

Also, psychologically salespeople actually like this one because it's not a “no” and the salesperson is living in, as we call it, ‘hopa-hopa land’; they’re hoping someday this is going to be a real prospect. I think we're in holiday mode, and we're feeling more charitable as salespeople and feeling like,
‘Okay, I might as well accept this one. I don't want to create conflict at the holidays. That would be uncool’

Let me give you a few ideas that have been proven to work over time….

Having the mindset that this is a blow-off. If the prospects building was on fire and I had water and fire equipment, they wouldn't “give me a call me after the holidays”. They'd say “hey, I know it's the holidays, but you have to come in and save me!”

A big part of it is if they don't see a need or have a pain OR I haven't made it apparent to them through questions that they've discovered they have a problem or an issue, they're automatically going to say this.Your mindset has to be ‘it's a blow-off’. What I’m actually hearing is a conditioned response.

Some of the tactics you can use:⚔️

You can call them on it. A rule is if you feel it say it.

“Hey, I kind of get the feeling that you don't really want to talk and that's okay because many times when people tell me to call off the holidays what they really mean is I really don't have interest, I'm hoping you'll forget to call me. Is that what's happening here? If so please tell me”

“Hey, makes sense. Let me write that down, but let me ask you. Why do you want me to call you after the first of the year?”

Or another version of that is:

“Let me just ask you. What do you see is different between now and the first of the year when you'd want me to call you back?

“Can I make a suggestion? Holidays are a time, if you're not going on vacation or going out of town, it could be the perfect time for us to meet. Because when the first of the year hits you're going to be busy, I'm going to be busy, it can be hard to get our calendars together. So, why don’t we just pick something over the next couple of weeks and get it on our calendars”

The point is to find the words, find the approach, just don't fall into the prospect’s system because after the holidays they're going to say “You know, it’s the first-quarter, it’s kind of slow. Call me after the first quarter.” Then you call April and they say “You know? Things are a little crazy now because the first quarter was slow. We're building things back up. Then they say “call me after Memorial Day”. After Memorial Day, it's going to be “call me after the fourth of July”, and then Labor Day and then the holidays. It's this vicious cycle.

So the question for you this week is:

What can you do differently the next time you get the “call me after the holidays” prospect response?

Be Friendly with Your Customers, But Never Friends

Too Much Product Knowledge Can Cost You

Is a Good Offense Always the Best Defense?