May 7, 2019 by Jody Williamson in Management & Leadership 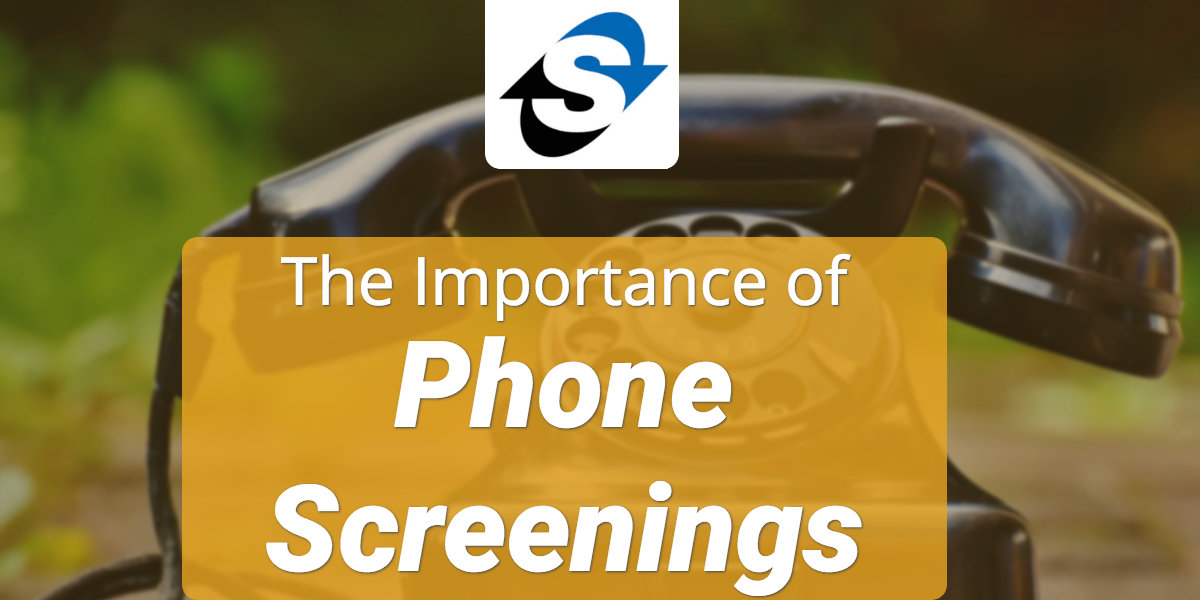 In one of my recent blogs I talked about the importance of testing in the hiring process, so we can know what's going on below the surface before we begin the process, too deeply, of interviewing and ultimately hiring someone.

For today’s blog, I want to talk about the step that happens right after the test.

The purpose of the phone screening is to have a quick 5 to 10 minute phone call, where we can disqualify the people that we shouldn't be interviewing. Candidates we shouldn't be taking the time and energy to actually sit down in front of.

There are two steps to the phone screen.

Step one is when people express interest in the position, have your assistant or electronically convey to them that you have windows of time. You might say, "Tuesday afternoon from one to three is when I'm available to have a 10-minute conversation to have an initial discussion as to if you would be a good fit and if we'd be a good fit for you." That's step one. Put the onus on them to schedule a time and then see, do they hit the time? You'd be surprised how often someone sets a 1:30 time and they don't show up or they show up 10 minutes late.

If they show up 10 minutes late to an interview on the phone, what's going to happen after you hire them?

Step two is when they make the call, I want you to act like a rushed prospect. I want you to act like somebody who is getting a call from a salesperson and they're not necessarily that interested. So you have the demeanor that says, okay, prove it to me. Why should I buy from you? Because we all have that happen with prospects.

See, in the phone screening, I'm trying to find out how they handle a little bit of pressure, how do they handle some objections? Because that happens in sales. I don't care what industry. There are objections and there's pushback from prospects.

So when they make the call, I'd suggest you start with some kind of word track like this.

"Hey, Mary. This is going to be a quick interview here. We've just got about 10 minutes and the purpose of this is for me to ask you some questions and you can ask me a couple of questions to determine if we have an initial fit here? Enough, at least, to have you sit down for a face to face interview. Okay, you ready?"

You want to rush that. You want to act like a prospect who gets a call, who's hurried and trying to get the salesperson out of their game. Now, at this point, if Mary says, "Appreciate that, but sounds like you're rushed. Is there a better time I should call, or can we extend our time a bit because I'd really like to have a conversation today?" That's what you want a salesperson to do. Does she push back a little bit would be something that I would listen for.

Then continuing, I would say, "Okay, so I'm at the end of this conversation, here's what's going to happen. We are going to end the call and then by Tuesday at 2:00 PM, we're going to have a list of those candidates who make the cut. If you're one of those, then you can call on Tuesday and we'll tell you if you're one of them. We've already interviewed everyone. You're the last one. So, we're figuring out if you going to be one of the five. Okay, you ready?"

At this point, you’re seeing if Mary pushes back?

Does she ask a simple closing question? Which would be, "Hey, before you go, can I ask you ... I'm the last one of all the people, can you tell me now if I'm one of the five?" I would expect her to push back because when a prospect gives an objection, does the salesperson just bail out or do they overcome the objection and maintain composure and push through it?

When you're doing your phone screening, don't be a jerk because you'll scare people away. But I certainly want you to have a demeanor that's the opposite of most managers, which is, "Hey, glad you called. Hey, I got to tell you some great things about our company." That's not the purpose of the call. We'll talk about how great our company is way down the road, but for now we want to have a conversation around if they qualify to get to the next step for the interview.